The Premonstratensian Abbey of St. Margaret and in Witów 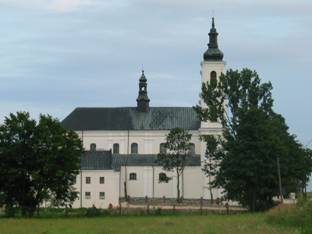 PARISH OFFICE OPEN ONE HOUR BEFORE EACH MASS

Architecture and interior design features of the church

None of the relicts from the original Premonstratensian Abbey in Witów have survived to our time. Numerous invasions and fires caused the objects which constituted the sanctuary decorations to share the fate of the building. The church was built in a precisely chosen location and is made of rough-cast brick in the late-Baroque style. It is a tree-nave, basilical church. The porch is between 2 quadrangular towers in west façade. Above the porch is the choir loft. 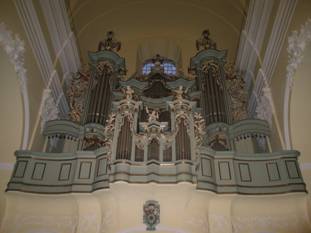 There are three bay naves and a rectangular presbytery which has the same width as the main nave. In the south side-nave is the narrow St. Cross chapel made of wood. A transparent baroque door leads to the chapel.

In the presbytery and the main nave is cradle-vaulting with large windows. The side naves are chapels connected by arcaded passages in which side alters are placed dedicated to St. Norbert who founded the Premonstratensian order, St. Margaret, St. Eustace and . In the middle is the main Altar of the Lord’s Annunciation which has been recognized as miraculous since 1735. In the center is the Dove in glory and above it God the father in the clouds. Statues of the four evangelists are by the columns. and St. Norbert are on in front of the higher columns.

In the presbytery, on both sides, are stalls, and on the right side is situated the abbot lodge. The marble font dates from 1646. 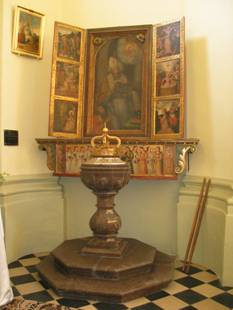 By the font is a triptych of St. Stanislaw from 1585, with scenes from his life and martyrdom. Baroque confessionals have round paintings of St. John Nepomucyn,
St. Mary-Magdalene, St. David and St. Peter. 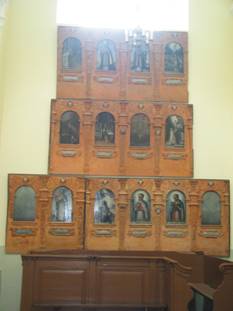 Under the choir, back parts of stalls with paintings and a parapet of the musical choir from the previous church.

History of the church in Witów

Witów Abbey dates back to 1179 when ’s bishop, known as Wit from Chotl, and his arms Janina, founded the church and monastery for the Premonstratensians. The takes its name from this man. Before the Premonstratensians arrived the parish church was ’s. Archival references tell us of a cramped and gloomy, Romantic-style abbey, home to both nuns and brother. The first Premonstratensians church and monastery were destroyed in the time of Tartar invasion in 1240 and most of the inhabitants were murdered. The three surviving nuns were moved to their other abbey in Busk. Only brothers were now left in Witów. As a result of fire in 1265 all documents and archives were burned. Thanks to the brothers’ providence the church and monastery were fast rebuilt. Around 1470 the complex was surrounded by defensive walls. To this day only the entrance gate, also called the defensive tower still exists. In 1657 the church and monastery were ravaged and plundered by Swedish troops. In 1677 prior of the abbey, Jacob Rychlewicz, rebuilt those devastations. Warmian and Silesian specialists were employed to complete the building of the church which began in 1730. The temple was consecrated in 1784 under the name of St. Margaret and St. Eustace. Work was finally completed about 1804 and in 1819 liquidation of the Premonstratensian order took place. The parish of Witów was established in 1825. 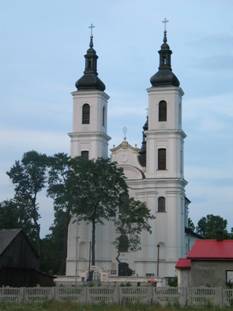 Contributions for renovation of the church can be paid at this account:

Groups of visitors are asked to phone in advance